The United Kingdom is rightly basking in the glory of an outstanding performance at the Rio Olympics. Finishing second in the medal table behind the USA and ahead of China is a phenomenal achievement and it is no idle boast to claim that Team GB is now a sporting superpower. Team GB’s medal haul represented its highest medal total in the summer Olympics with the exception of London 1908. The target set by UK Sport was to exceed the 47 medals achieved at Beijing 2008, the previous highest ever in an overseas Olympics. Team GB smashed this target with 67 medals and in so doing became the first ever team to increase their medal total immediately after hosting the previous Olympics.

The transformation in Team GB’s performance can be seen in Figures 1 and 2 which track the medal total and number of gold medals, respectively, at the summer Olympics since World War Two. I have included a 3-period (i.e. 8-year) moving average to provide an underlying benchmark of “fundamental performance” to control for random variation. When you look at the medal total you can see that Team GB’s performance is characterised until 1996 by a long-term cyclical pattern somewhat exaggerated in the 1976 – 1996 cycle by the effects of the boycotts at Moscow 1980 and Los Angeles 1984. From this perspective there is very strong evidence of a structural break after Atlanta 1996 with a strong upward trend in performance levels. By 2016 the fundamental medal total is estimated to have risen to 59.7 medals compared to only 19.7 medals in 1996.

The structural break is even clearer in Figure 2 when you consider only the number of gold medals won. Unlike the medal total, the fundamental performance for gold medals over the 40-year period 1956 – 1996 more or less flatlines around an average of 4.0 gold medals. By 2016 the fundamental gold medal count had risen to 25.0 gold medals, a truly astonishing transformation. 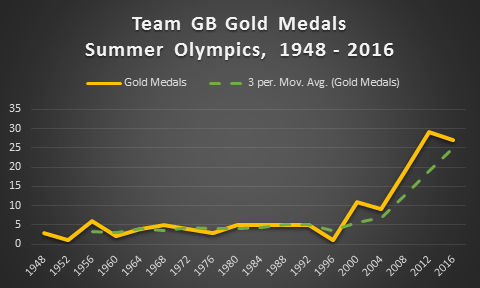 So why has Team GB been so success in the last 20 years? The instant post-mortem by media pundits has focused attention on at least seven factors:

As always, a radical transformation in performance is due to a “perfect storm” (or what economists call “cumulative causation”) when a number of mutually-reinforcing forces come together to create a virtuous circle of improvement (or a vicious circle of decline in the case of a sharp drop in performance levels).

Data analytics is one component of the marginal-games philosophy in a number of the Olympic sports. It was particularly noteworthy that the track cyclist, Mark Cavendish, paid explicit tribute to the role of data analysts in an interview the day after winning his silver medal in the Omnium event. In this respect the contribution of the English Institute of Sport (EIS) must be recognised. The EIS is an international centre of excellence in the provision of support services to the Olympic sports. The EIS has long been a pioneer in performance analysis and have been heavily involved in the development of data analytics in several Olympic sports. Through the EIS I was invited to be a “fresh pair of eyes” in one of the Olympic sports in which the performance analysts were seeking to develop their analytical capabilities. I was very impressed not only by the knowledge and commitment of the performance analysts I worked with but also their attitude – their openness to new ideas and willingness to work with others outside their own sport to develop their own expertise. It was a great example of the marginal-gains philosophy in action.

I listened to Matthew Syed, the Times sports columnist, being interviewed on Radio 5 Live on why Team GB had done so well. Syed is always great value as someone who combines the analysis of the search for excellence in elite sport with the experience of having himself competed at the highest level in table tennis. He stressed the importance of the marginal-gains philosophy in Olympic sports and lamented the failure of football to embrace a similar philosophy. When asked why football did not seem to adopt the marginal-gains philosophy, Syed blamed the short-termism in football and the attachment to conventional ways of doing things. He has expanded on the limiting effects of conventional wisdom in football in his Times column today – “Conventional wisdom rules in football, but the game’s coaches need to be more innovative” (Times, 29th Aug 2016).

The importance of a long-term approach alongside a marginal-gains philosophy has been unwittingly recognised by some of Team GB’s competitors. Australia and others have criticised GB track cycling for producing Olympic results out-of-line with their performances in major championships in the run up to Rio. But it is no surprise given that Olympic performance is the be-all-and-end-all for funding provided via UK Sport. World and European success in any sport is always very satisfying but the harsh reality of the pursuit of Olympic excellence in the UK is that every other major championship has become a stepping stone, a valuable learning opportunity, en route to the next Olympic Games.

Perhaps it’s the economist in me but I keep coming back to financial incentives as a key element in the story of Team GB’s Olympic success. The marginal-gains philosophy is a “David strategy”, a means for resource-constrained organisations to compete with resource-richer rivals. Premiership football with the enormous revenue streams generated from their media rights face relatively few financial constraints in the pursuit of sporting success and can afford to throw money at the problem. If the team isn’t performing, buy more star players and/or sack the head coach and hire a new one. The marginal-gains philosophy, specifically the use of data analytics, is always more likely to be adopted by teams with resource constraints due to their small economic size, salary caps or a reliance on public funding. It’s why ultimately data analytics is always more likely to be play a more meaningful role in Olympic sports and rugby union rather than Premiership football (and why I’m working for AZ Alkmaar in the Dutch Eredivisie rather than a Premiership club in England!)