It’s very early days in the Championship and a mug’s game to predict with any certainty who will be promoted with so few games played. But already there are ominous signs for the promotion prospects of Nottingham Forest, Burton Albion and Blackburn Rovers. Why? Quite simply they have been defensively weak in their first four games and a strong defence is a fundamental building block for any team with serious ambitions of getting promoted to the Premier League.

So what’s the evidence to support the assertion that defence is crucial to winning promotion to the Premier League? Well let’s look at the final league table for the Championship last season.

A casual inspection of the league table suggests that goals conceded rather than goals scored are a better predictor of league performance, and this is indeed the case. Simple regression analysis indicates that goals conceded alone explains 74.4% of the variation in league points whereas goals scored only explains 60.2%. The clubs finishing in the top six all ranked as the best defensively and the three clubs winning promotion to the Premier League – Burnley, Middlesbrough and Hull City (via the play-offs) – had the three best defensive records in the Championship, averaging only 0.73 goals conceded per game which represents a 39.6% performance gain compared to the league average of 1.21 goals conceded per game. By comparison the three promoted clubs had a 23.9% performance gain in attack, averaging 1.50 goals scored per game. Middlesbrough in particular provide a very compelling case for the relative importance of defence over attack, having the best defensive record in the Championship last season but ranking only 8th in goals scored, and winning automatic promotion on goal difference over Brighton and Hove Albion due crucially to conceding 11 fewer goals.

Brentford and Fulham both demonstrated last season how a weak defence can seriously undermine a promotion push. Both clubs out-scored Middlesbrough and indeed Brentford were joint top scorers with Burnley and Brighton and Hove Albion. But Brentford could only finish 9th after averaging 1.46 goals conceded per game, the 8th worst defensive performance in the Championship and only marginally better than MK Dons who were relegated. Fulham performed even worse defensively, having the 3rd worst defensive record after the two relegated clubs, Bolton Wanderers and Charlton Athletic.

The importance of defence is often undervalued as Anderson and Sally persuasively argue in The Numbers Game (Viking, London, 2013). It’s partly a form of decision bias because attacking success (i.e. goals scored) is a positive observable event whereas defensive success is all about non-occurrences, not allowing the opposition to have shots at goal and not conceding goals. We tend to over-emphasise positive observables and undervalue non-occurrences. Anderson and Sally call it the ‘inequality central to understanding football’. In football 0 > 1 because ‘goals that don’t happen are more valuable than those that do’. (p. 131). The expected value in terms of league points from keeping a clean sheet in a game is considerably higher than the expected league points from scoring a single goal. Anderson and Sally analysed the points value of goals scored and conceded in the Premier League over 10 seasons and found that a clean sheet had an expected points value of nearly 2.5 whereas scoring a single goal had an expected points value of only just over 1.0. A very similar pattern is observed in the Championship last season. 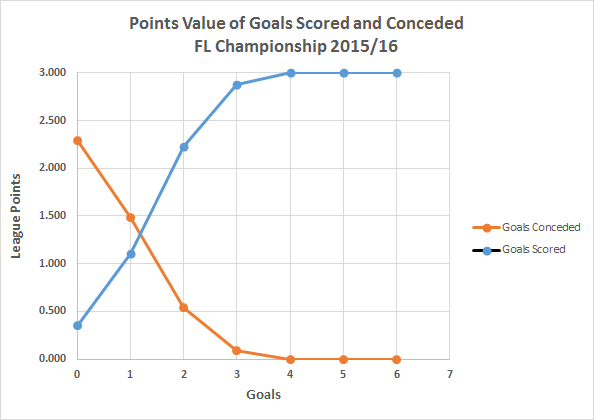 Defence is an obvious Moneyball strategy in the sense that developing an effective defence tends to be a more cost-effective way of improving performance. The football players’ labour market tends to reflect the decision bias towards goals scored with strikers attracting a substantial salary and transfer-fee premium. Defenders have tended to be undervalued although perhaps at the top end the recent transfer of the young defender, John Stones, from Everton to Manchester City, may signal a market correction. But an effective defence is also cost-effective because ultimately it is down to tactical organisation especially good positional decision-making that can be improved through coaching and time on the training pitch. Defending is reactive and in some ways much more amenable to coaching and practice than attacking which is more creative and instinctive and hence much more difficult to coach.

Effective defending is partly about effort but as always it is not just the quantity of defensive activity but also the quality of that defensive activity. Defensive effort as measured by the total number of challenges, blocks, interceptions and clearances partly reflects possession share with struggling teams having to defend more. In addition good defending is as much about being in the right place at the right time and so isn’t necessarily reflected in tally counts of actual defensive contributions – what Anderson and Sally call the “Maldini Principle” or “dogs that don’t bark”. I have found that a useful measure of effective defence is the ratio of opposition shots on target inside the box (measured as the deviation from the league average) relative to defensive effort. I call this ratio “defensive efficiency” (and scale it by 104 for presentational purposes) since it measures defensive output (shots allowed) relative to input (defensive effort). Good defence is about restricting the number of opposition shots at goal but not all shots at goal are of equal threat as expected goals analysis has highlighted. The most dangerous shots are those from inside the penalty box on target and so restricting this type of shot is the critical aspect of effective defence.

There is virtually no correlation between defensive effort and goals conceded (r = 0.026) whereas defensive efficiency is very highly correlated with goals conceded (r = -0.849). Derby County (89.2), Hull City (85.6) and Middlesbrough (67.2) were the highest ranked teams in terms of defensive efficiency with all three teams being promoted to the Premiership. The lowest ranked teams were Rotherham United (-91.1), MK Dons (-73.0) and Bolton Wanderers (-63.0) with all three teams finishing in the bottom four.

So as Championship managers evaluate the early-season form of their teams, the message is very clear to Philippe Montanier at Nottingham Forest, Nigel Clough at Burton Albion, and Owen Coyle at Blackburn Rovers – improve your defence quickly or both your promotion hopes and job security will decline very rapidly.